A little known fact is that Git supports client-side hooks to execute a command line script before certain commands such as commit or push. This feature can be used to perform additional quality checks on your codebase. What’s way cool about it is that Git will actually cancel the action if the exit status code of a script is not zero. This makes it a perfect fit for automated checks making sure you’re not shooting yourself in the foot.

Creating a hook is very simple: all you need to do is create a shell script in the .git/hooks/ directory of an existing Git repository. You will find several sample hooks in this directory already. All of these end with .sample, rendering them inactive. If you create your own, make sure this script file you create starts with a shebang and is executable. 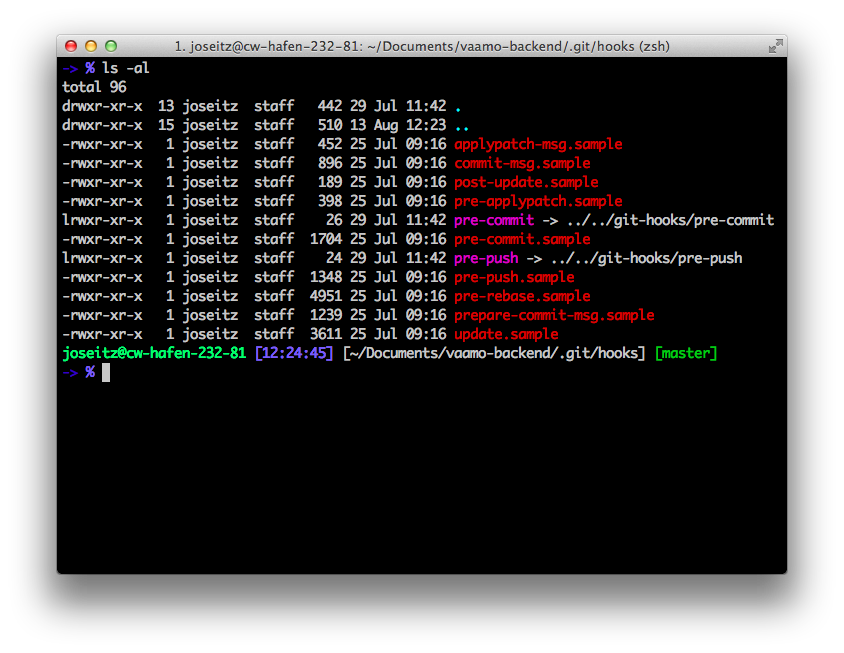 Make hooks test your every commit

I have commit hook perform a full compile and test of my code on every commit. Not only does this make sure that everything I commit is stable and working, it also makes cherry-picking commits so much easier and less risky. Sure it may take some time for the compile and test to run, but the time you save, hunting down that issue you just inadvertently pushed to the master branch is closer to zero.

I dislike the idea of TODO comments. They are usually markers of a broken window but what’s worse is that they tend to invisibly rot and accumulate. Here’s my pre-push hook to keep these broken windows and untracked tasks in mind:

The way Git hooks work, they are not pushed to the remote repository and thus not shared with your teammates. A simple solution for this issue is to keep the hooks in the Git repository themselves and have a script that symlinks them into the local .git directory. You will still need to execute this script once on every machine, but your git hooks will be shared, versioned and in-sync.

In my experience the usage of git hooks for quality assurance to a certain extend reduces the number of broken builds and broken windows. It is certainly not a silver bullet, but still worthwhile.

Feel free to add your own ideas and/or suggestions on how to use Git hooks for quality assurance to the comment section!